This coal-fired, unsanded moulded brick has the look and character of a traditional field kiln brick. It has a natural nuance with strong accents from the coal fire and lime. Thanks to the current process, it has the same benefits and technical characteristics as a modern facing brick. Not ‘just another brick in the wall’

The site of this remarkable house was originally an undeveloped building plot for a detached property on an old green parcel of land from the 1960s. However, the clients didn’t like the stereotypical conformist concept of a detached house on a neatly mowed lawn. 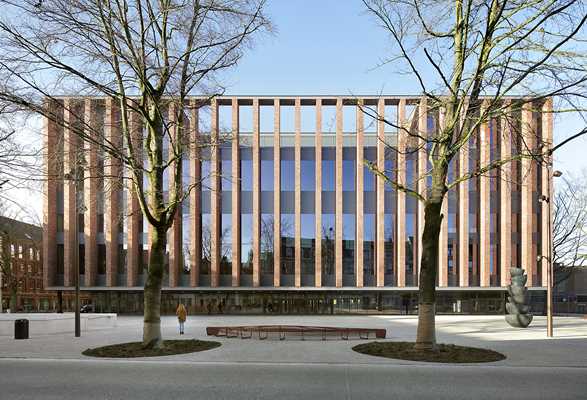 BMCC, an urban renewal project that plays all the trump cards of the historic city centre

Bruges city centre is another attraction richer. The Beursplein (Exhibition Hall Square) now lives up to its name because since 31 March, it has boasted the brand new Bruges Meeting and Convention Centre (BMCC) where an impersonal car park used to mar the view. Designed by Souto de Moura Architects and META Architectuurbureau, this gem connects the neighbourhood in every respect while also attracting lots of tourists to the heritage city at the same time.

Preparation of the construction site

Quality brickwork starts with the proper storage of the materials. Provide a firm level base so that bricks are not in contact with rain and/or dirt.
As clay is a natural material, successive production runs of the same kind of bricks may present colour variations and size tolerances.
The following precautions will help minimizing this:

Brickwork is sometimes marred by white bloom. This efflorescence is usually caused because bricklaying is done under unfavourable weather conditions. The necessary protective measures are often not implemented due to a tight schedule and fast building pace. In very wet conditions, water in soluble substances can result in efflorescence on the surface. In spring as well as autumn, after a wet period (when the brickwork has dried again), soluble substances can rise to the surface as a result of moisture transport. After evaporation of the water, a white bloom is left behind. (Source: Efflorescence on brickwork – Heidelberg Cement Group)
Efflorescence on brickwork is always likely to occur. There is no brick - or combination of a certain brick with a specific mortar - that is absolutely efflorescence-free. By taking a few simple precautions, the risk of efflorescence can be reduced.